Yes, there is an election on
Tuesday, November 2, 2021!
All Colorado elections are mail in ballot.
TOO LATE TO MAIL!
But there’s STILL TIME to drop your ballot off at 6th and Coffman, up to Tuesday, November 2 at 7pm, or any other Ballot Drop Location in Longmont or Boulder County, here.
This page will be updated until Election Day. 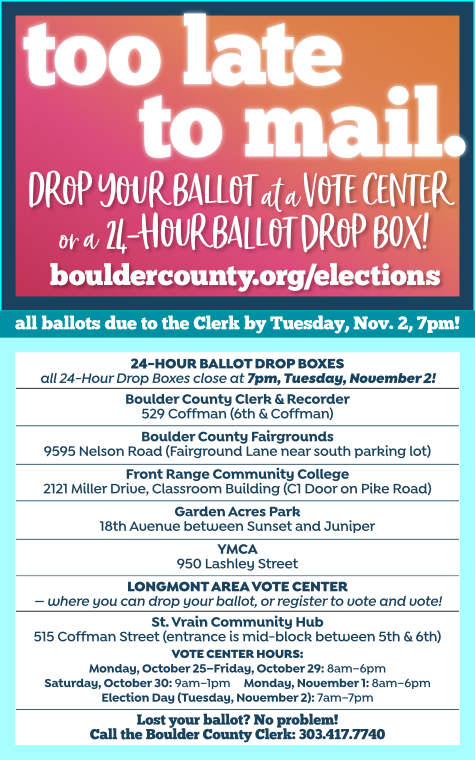 Sign up for Ballot Track, ballot drop locations, and all voting info:
bouldercountyvotes.org
Questions? Lost your ballot? Call the Boulder County Clerk at 303/413-7740.

EVERY election is IMPORTANT. And the 2021 election is no different. Three heavily funded statewide measures are on our ballot — the Boulder County Democratic Party voted to OPPOSE ALL THREE: Amendment 78, Proposition 119 and Proposition 120 (see more below).

Also, an anti-mask, anti-mandate, anti-CRT group (coloradosmad.com) has endorsed extremist candidates running for school board director seats right here in the St. Vrain Valley School Board District. And we know this is happening in school districts all over Colorado and the country. Although Longmont Area Democrats does not endorse candidates in non partisan races such as the city council and school board races, we do think it’s important to raise awareness about candidates who promote policies that would be harmful to our kids and their education, as well as undermines their safety in our schools. That’s why we WILL NOT list the names of these particular candidates, except the candidate that withdrew his candidacy on October 12, 2021 (also below).

PLEASE VOTE YOUR WHOLE BALLOT, SEAL AND SIGN THE ENVELOPE, DROP YOUR BALLOT AT THE CLERK’S OFFICE AT 6th & COFFMAN, OR AT ANY OF THE
24-HOUR DROP BOX LOCATIONS, HERE.

THE LAST RECOMMENDED DAY TO MAIL YOUR BALLOT IS
MONDAY, OCTOBER 25, 2021.

ARGUMENT AGAINST AMENDMENT 78:  The measure adds unnecessary and expensive bureaucracy and risks significant unintended consequences. A longer allocation process could delay or interrupt state services, including emergency responses to public health or wildfire disasters. Further, making grant funding subject to additional steps could jeopardize Colorado’s competitiveness for grant awards, resulting in the state receiving less money. Finally, the measure shifts decision-making from program experts and independent commissions to a political process in the state legislature (from the Blue Book, p. 6).

QUESTION: Is Amendment 78 a way to allow the state government to take federal money that is meant for a specific purpose and spend it however they want?

WHO IS BEHIND THIS INITIATIVE?: The initiative’s sponsor is Michael Fields, Executive Director of Colorado Rising Action, “Advancing Conservative Principles and Holding Colorado Liberals Accountable” coloradorisingaction.org

ARGUMENT AGAINST PROPOSITION 119: 1) Proposition 119 allows public money to be directed to private out-of-school service providers instead of invested directly in public schools. Public dollars set aside for education are needed to support the public education system. If voters want to increase retail marijuana taxes for education, the revenue would be better used to  expand the capacity of public schools in every community, keeping the money under local control and allowing school districts to reinstate programs they have had to cut and to provide additional learning and enrichment opportunities for children. 2) Increasing the sales tax on marijuana will further increase the gap in prices between legal marijuana and black-market marijuana, pushing more individuals into the black market and hurting legitimate retail marijuana businesses. Additionally, the retail sales tax on marijuana already places a greater financial burden on low‑income individuals; increasing the tax rate will only make this worse. (From the Blue Book, p.10)

QUESTIONS: Is Proposition 119 a way to increase taxes for education but not for public schools? Will it allow homeschool and private/charter school subsidies, but expressly disallow the money to be used for public schools or teacher pay?

WHO IS BEHIND THIS INITIATIVE?: Learning Opportunities for Colorado’s Kids is leading the Yes on Prop 119 campaign.

FOLLOW THE MONEY: The committee supporting Prop 119 reported $1.85 million in contributions and $1.67 million in expenditures. Gary Community Investment Company gave $1.45 million. Of this, $683,000 was used to gather petitions.

ARGUMENT AGAINST PROPOSITION 120: Permanently reducing property tax revenue to local governments may result in cuts to important government services. Proposition 120 will pose challenges for special districts, cities, or counties that rely on property tax revenue from multifamily homes or lodging properties to maintain services, such as water, transportation, education, and emergency services. In particular, critical fire protection needs are increasing rapidly, and not all areas of the state are able to generate the funding needed to support these local services (from the Blue Book, p. 19).

QUESTIONS: Isn’t Prop 120 just a tax cut? And isn’t Colorado underfunded enough as it is?

WHO IS BEHIND THIS INITIATIVE? Again, Michael Fields, Executive Director of Colorado Rising Action, is the initiative’s sponsor and the registered agent for the committee. coloradorisingaction.org

The Boulder County Democratic Party has listed all city council and school board candidates
who are registered Dems on their 2021 Voter Guide, at bocovoter.org
(The BCDP only endorsed one candidate this year, Meosha Brooks, for SVVSD, District D)

Incumbent Karen Ragland is running uncontested in District B.

The Boulder County Democratic Party has endorsed Democrat Meosha Brooks for the District D seat in the SVVSD.*

Sarah Hurianek is running for the District F seat.

*Tyler Gearhart withdrew his candidacy for the SVVSD District D seat on October 12, 2021. Gearhart’s name will still appear on the ballots, which have already been printed and mailed, but votes cast for him won’t be publicly reported and Brooks will win automatically, according to Boulder County Clerk’s office spokesperson Mircalla Wozniak. – Boulder Daily Camera, 10/12/21

WATCH: On Wednesday, October 6, 2021, Longmont Area Democrats held a Longmont City Council Candidate Forum. We invited all candidates, and all 10 candidates participated. Watch the recording of the event, below: