EVERY MONTH, there is something you can do, learn, participate in, then share — that “lands” on your ballot. Colorado had its Primary Election on Tuesday, June 28, where all the democratic candidates were nominated, and will be on your ballot in the fall: the midterm General Election on Tuesday, November 8. What’s different about the midterm General Election this year, is that it includes a Special Election to fill Joan Peck’s vacant at large city council seat (Joan Peck was elected as Longmont Mayor last fall).

The Boulder County Clerk will start mailing ballots to voters on Monday, October 17.

FIND your Precinct Leader, who will need your help dropping BCDP Voter Guides, beginning the same week that ballots drop, October 17! Precinct Leader Lookup tool, here.
You will also see a listing of your districts.

You can download and print this form to record your districts:
PRECINCTLOOKUP

The BCDP Executive Committee will met on September 14 to vote on ballot measure recommendations, which will then be listed in the 2022 BCDP Voter Guide, print version, as well as the Voter Guide webpage at: bocovoter.org

In Late September, the Colorado “Blue Book” will be mailed to voters, which includes the ballot language for each measure, with a description of each ballot measure in greater detail, with “for” and “against” arguments for each measure.

The Boulder County Democratic Party has presently formed committees to research, then make recommendations for each measure. The committees will present their findings to the BCDP Executive Committee, that will hear the arguments “for” and “against” each measure, then will vote “yes” / “no”  or “no position” by 2/3 vote. The BCDP recommendations will then be published in the BCDP Voter Guide and at bocovoter.org

NEXT, Get familiar with the democratic candidates that will be on your November 8, 2022 Ballot (for Boulder County):

All Democrats, unless where noted:

GOVERNOR
Jared Polis
(Elected in 2018. 4-year term. Limited to two consecutive terms.)
Up for re-election in 2022.

SECRETARY OF STATE
Jena Griswold
(Elected in 2018. 4-year term. Limited to two consecutive terms.)
Up for re-election in 2022.

COLORADO BOARD OF EDUCATION — AT LARGE
Kathy Plomer
Running for this seat in 2022.
(Plomer is the Democrat nominated in the June 28 Primary.
6-year term. Limited to two consecutive terms.)

STATE SENATOR, SD15
Janice Marchman
Running for this seat in 2022.
(This seat is currently held by a republican)

STATE HOUSE REPRESENTATIVE, HD19
Jennifer Parenti
Running for this seat in 2022.
(no other Democratic challengers)

BOULDER COUNTY SHERIFF
Curtis Johnson
Running for this seat in 2022.

BOULDER COUNTY TREASURER
Paul Weissmann
(Elected since 2014. 4-year terms.)
Up for re-election in 2022.

LONGMONT CITY COUNCIL, At Large
Gary Hodges
Sean McCoy
Mitzi Nicoletti
(for the seat that was vacated when Joan Peck was elected Mayor of Longmont.
The Longmont City Council election is non-partisan.
LAD does not endorse candidates in any non-partisan race.)

By July, you’ll know who all the Democratic nominees that will be on your November 8 ballot.
Boulder County Official Primary Election Results, here.

— JUNE —
PRIMARY ELECTION, TUESDAY, JUNE 28!
All Colorado elections are mail-in ballot. You’ll receive yours around mid-June. Sign up for Ballot Track, here.
Ballot Track is a free service for Boulder County voters that can send you notifications by text message, phone call, or email when your mail ballot has been sent and received by the Boulder County Elections Division.
(Below please find helpful slides from our June 1 LAD Meeting): 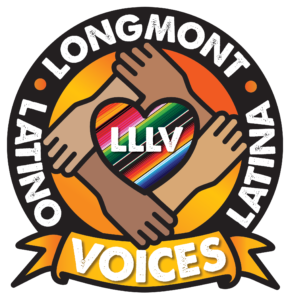 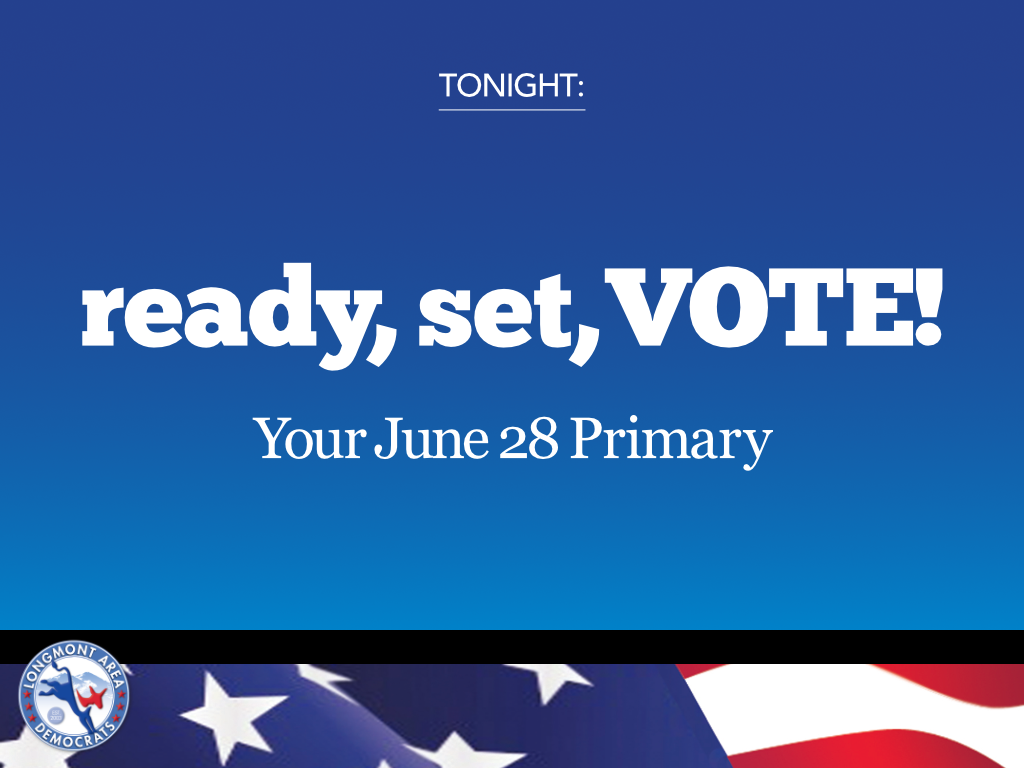 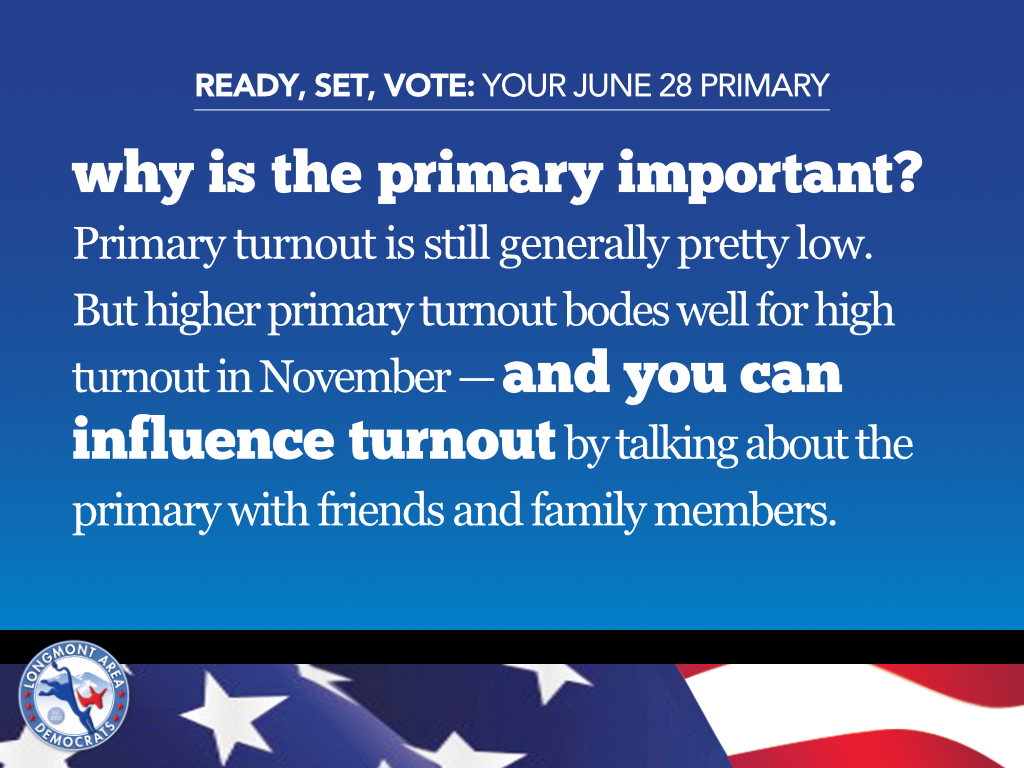 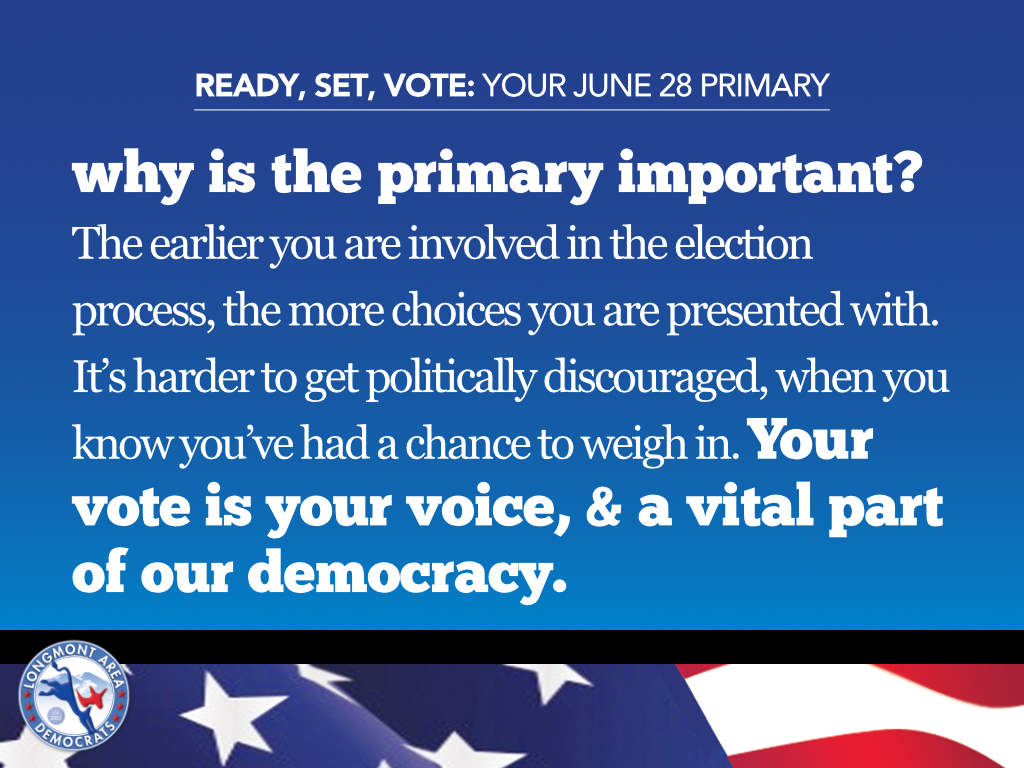 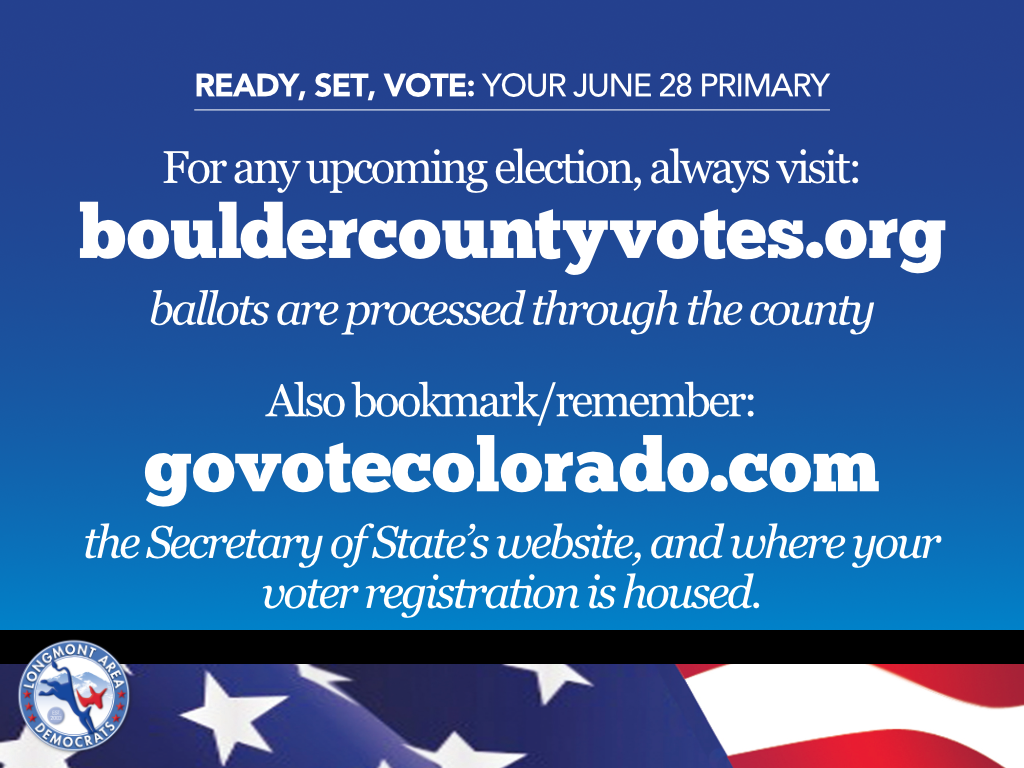 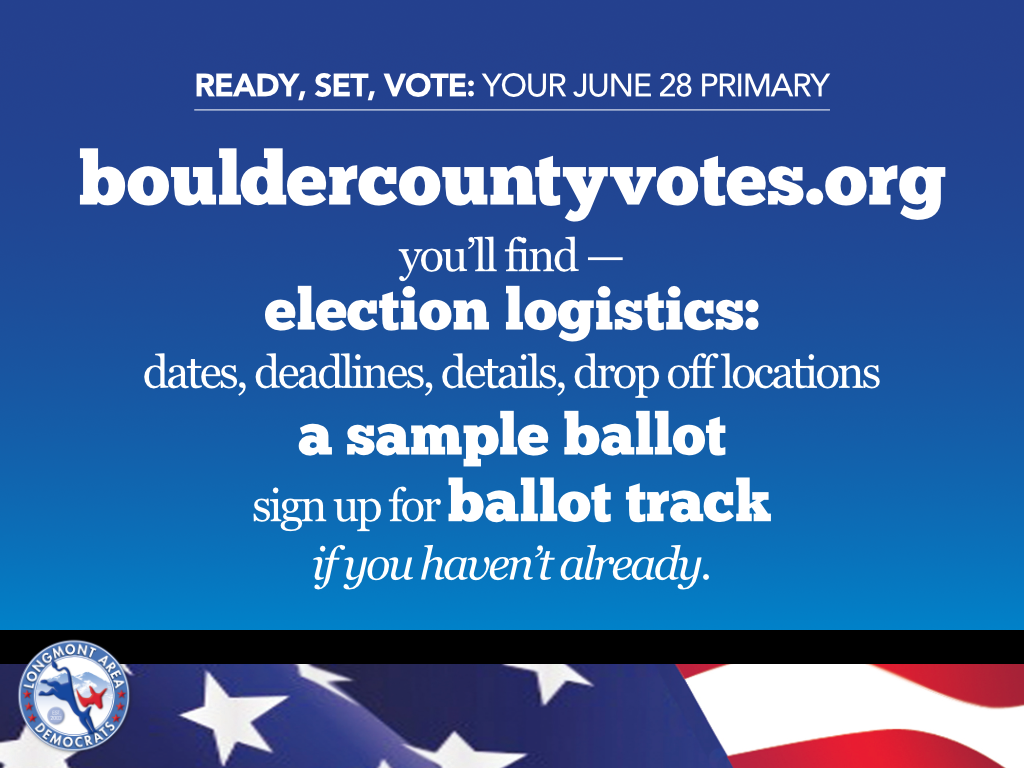 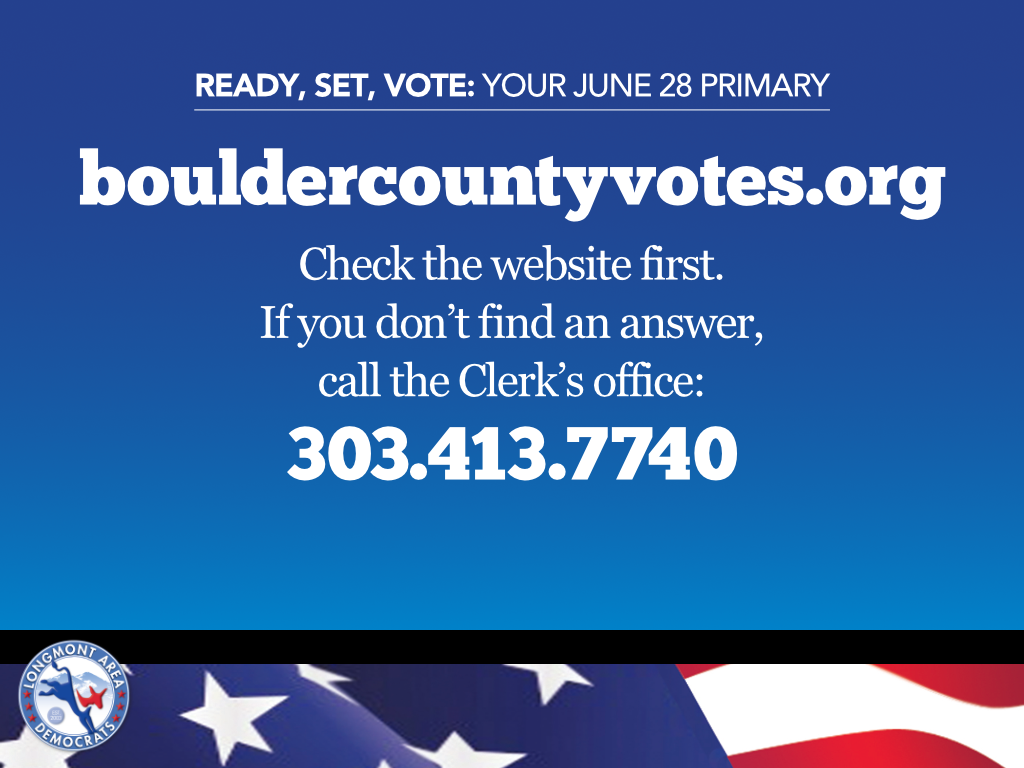 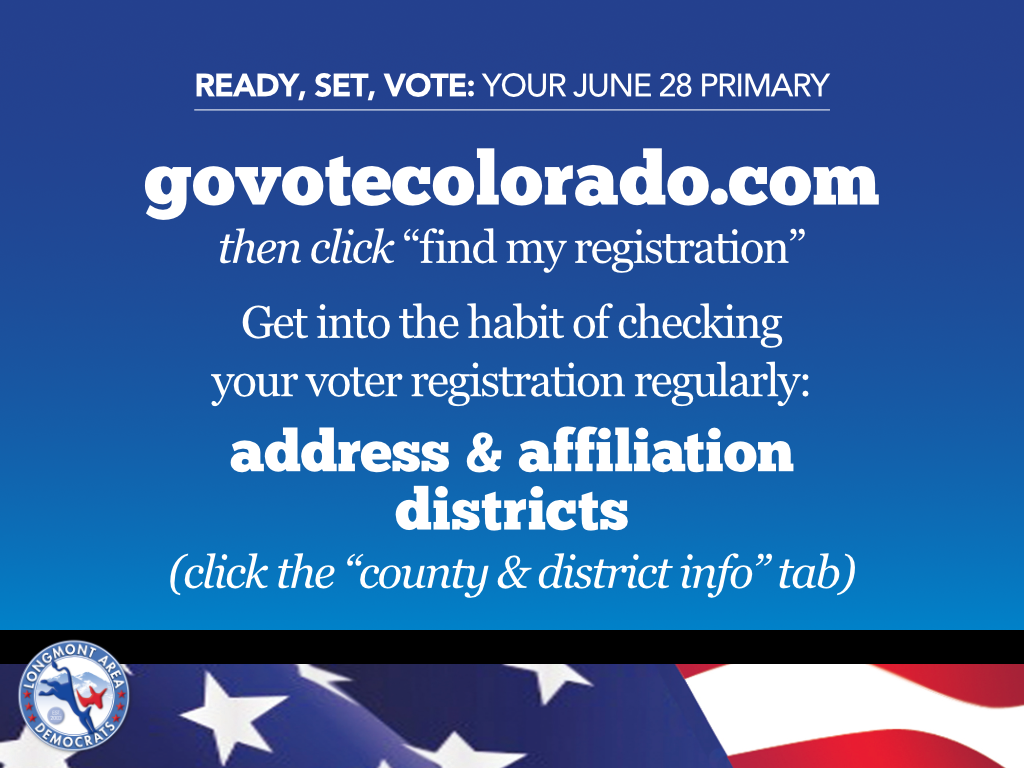 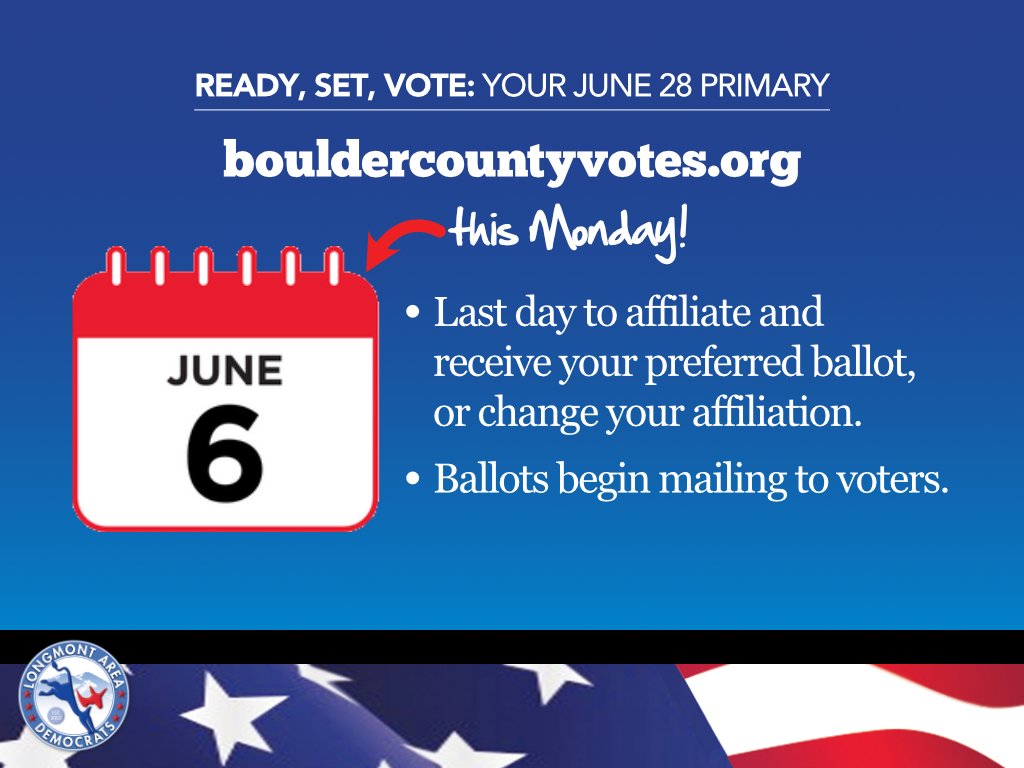 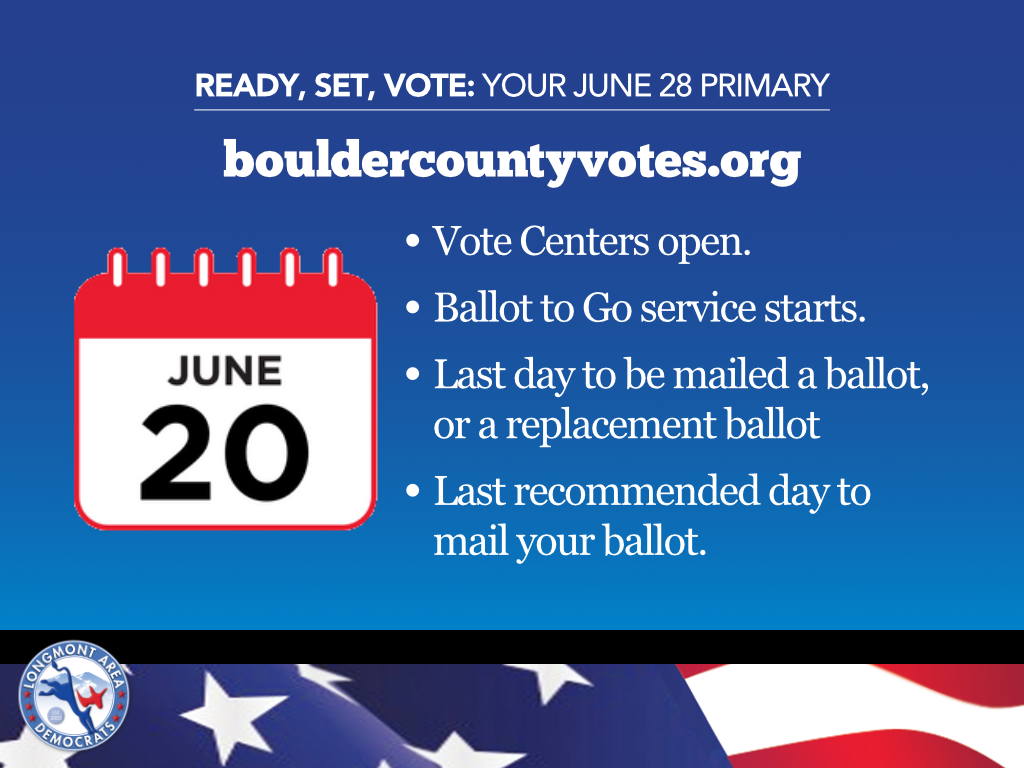 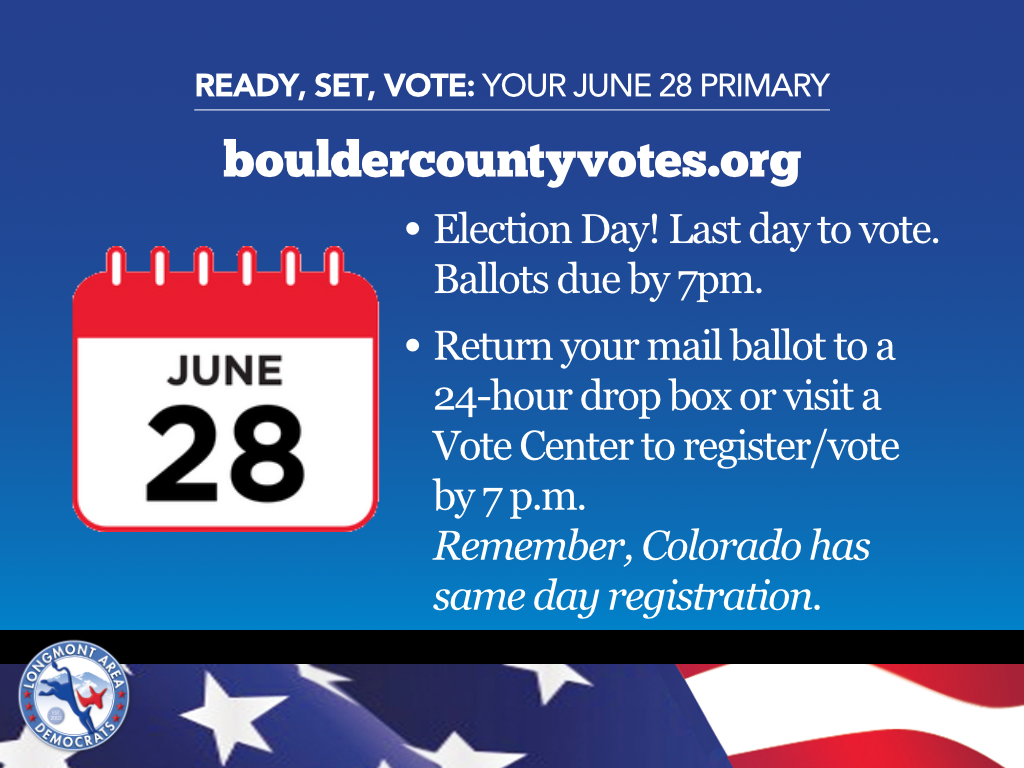 LOOK AT YOUR SAMPLE BALLOT FOR BOULDER COUNTY HERE. 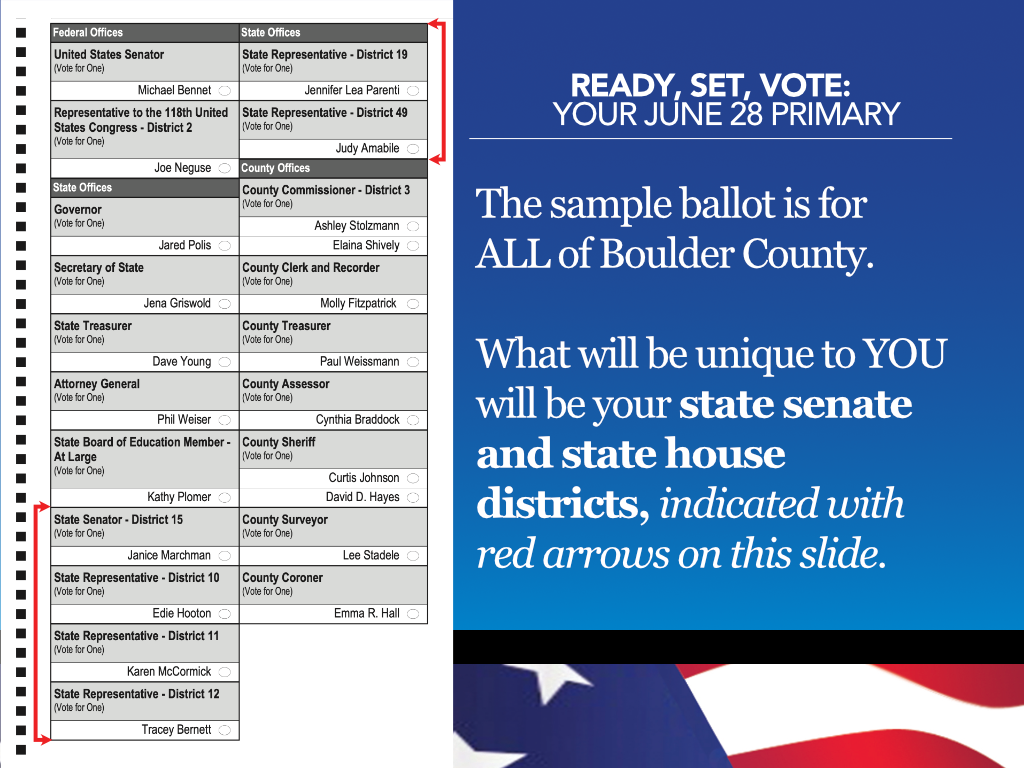 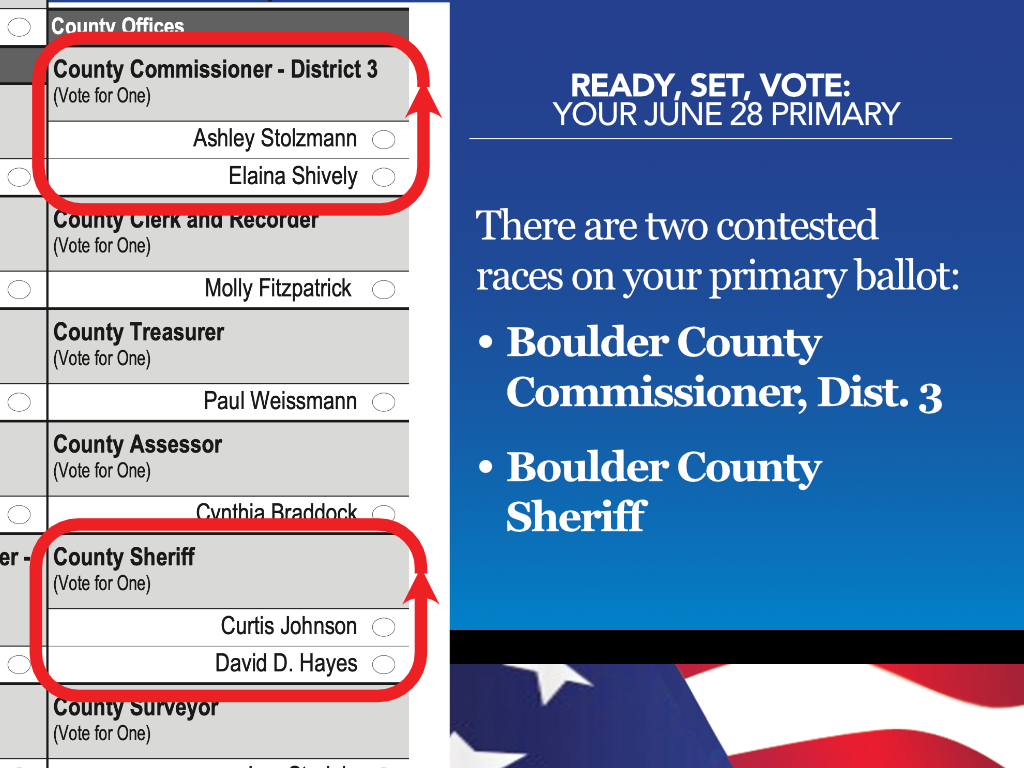 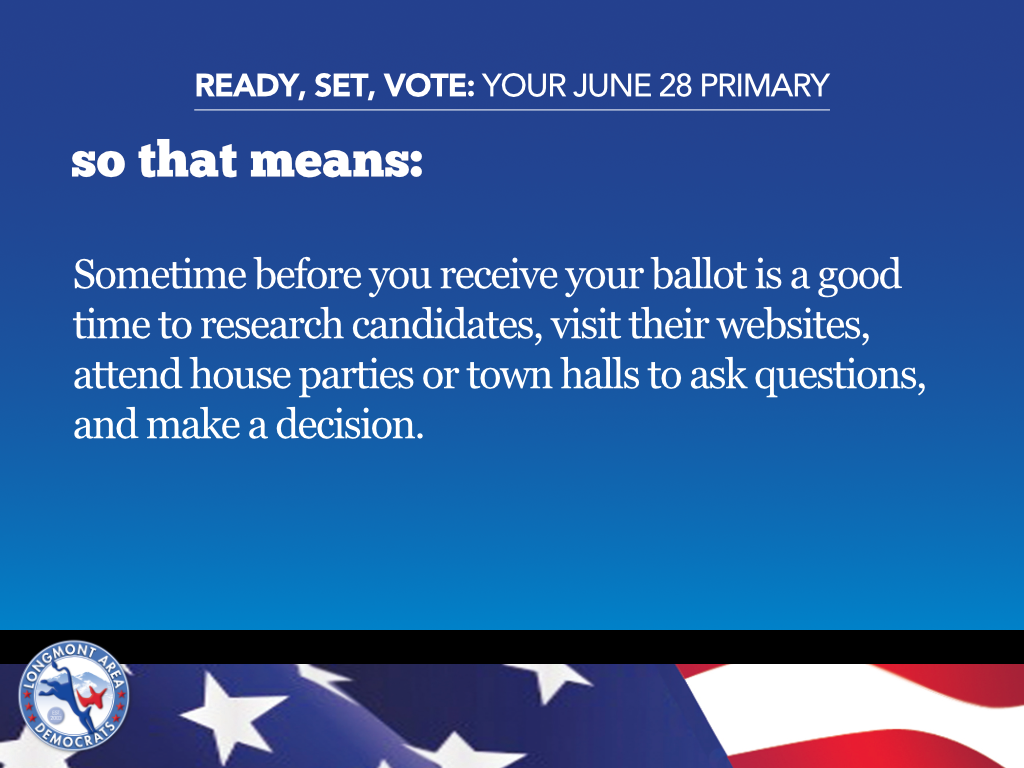 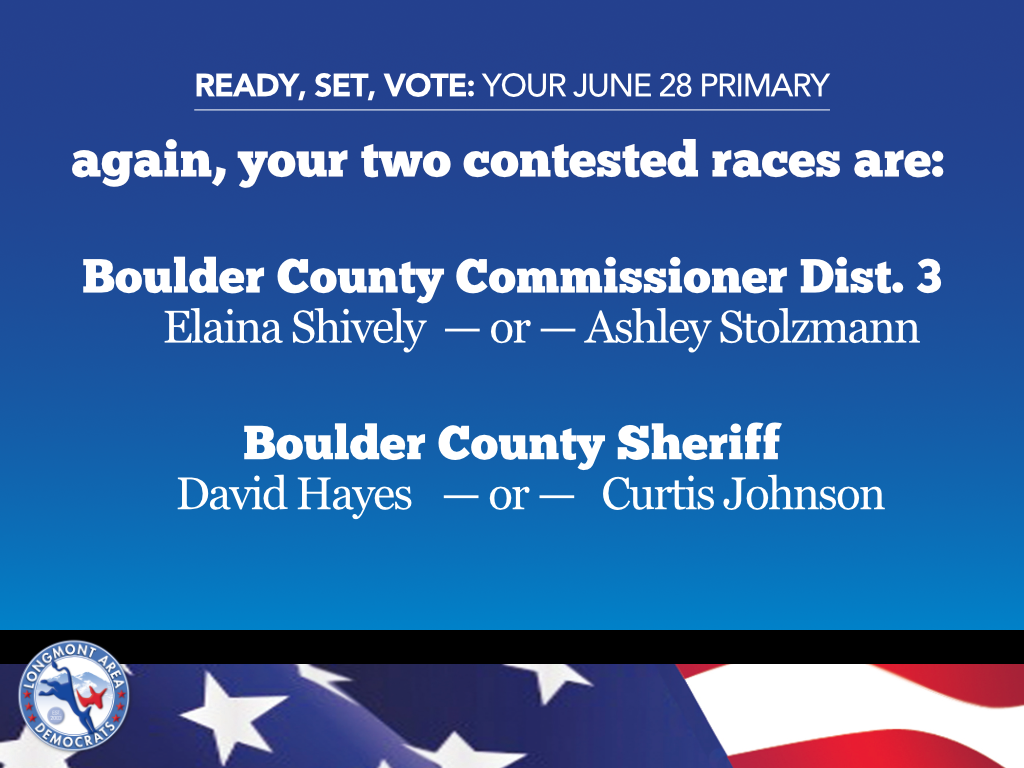 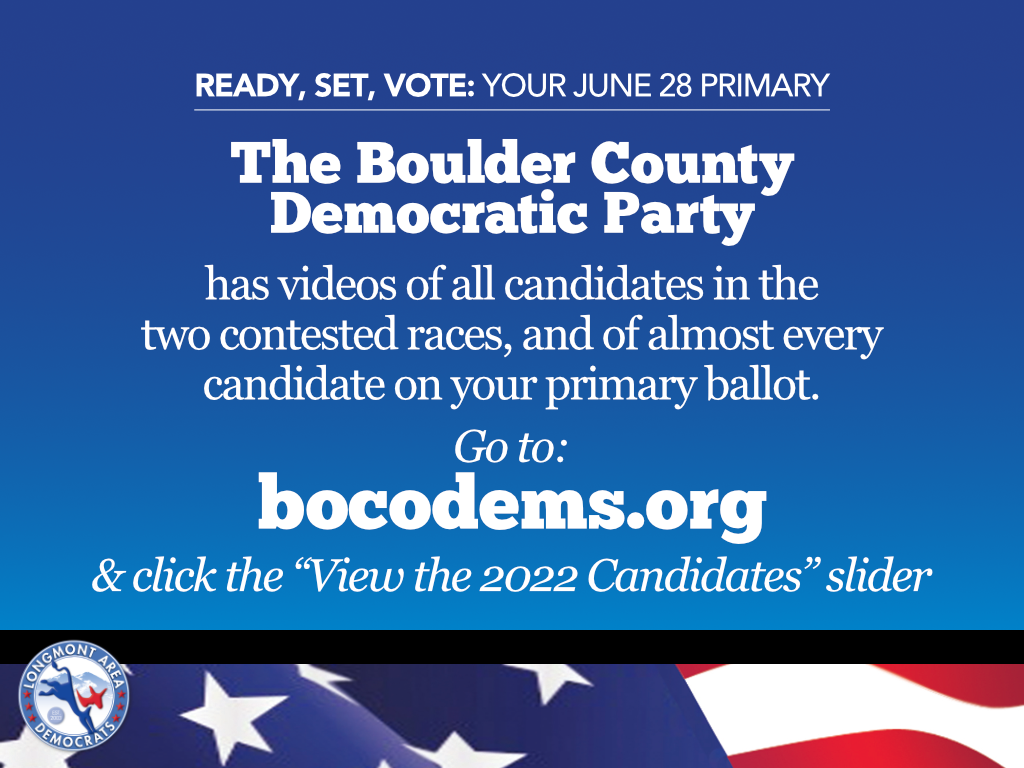 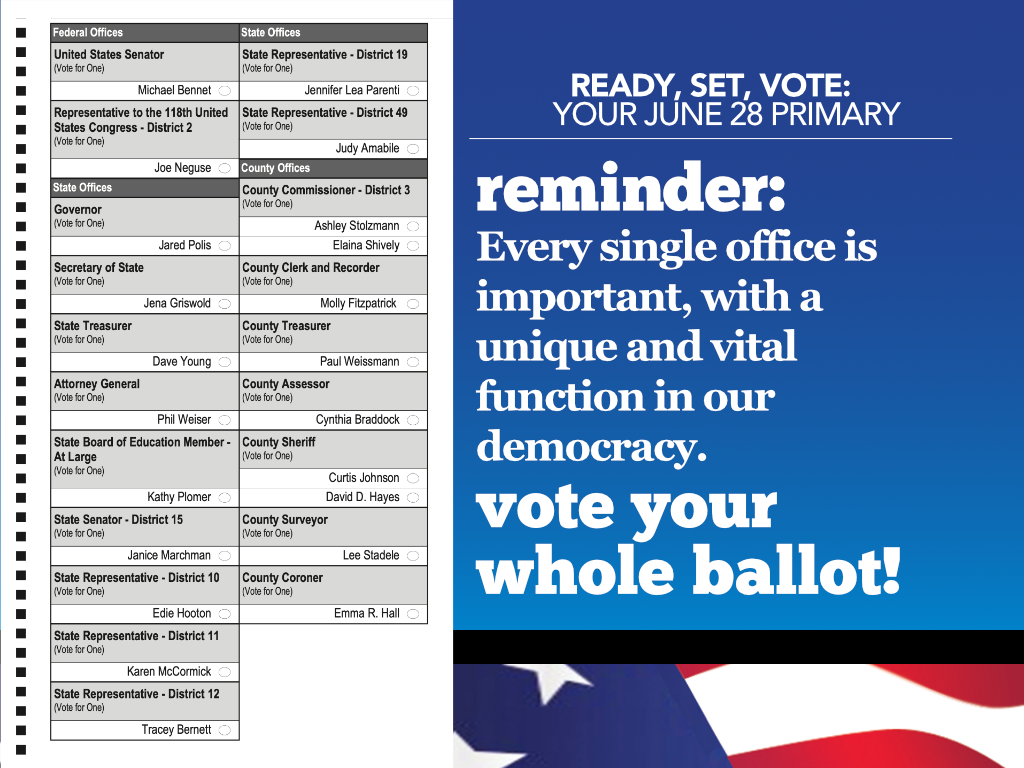 What Do Each of These Offices Do? 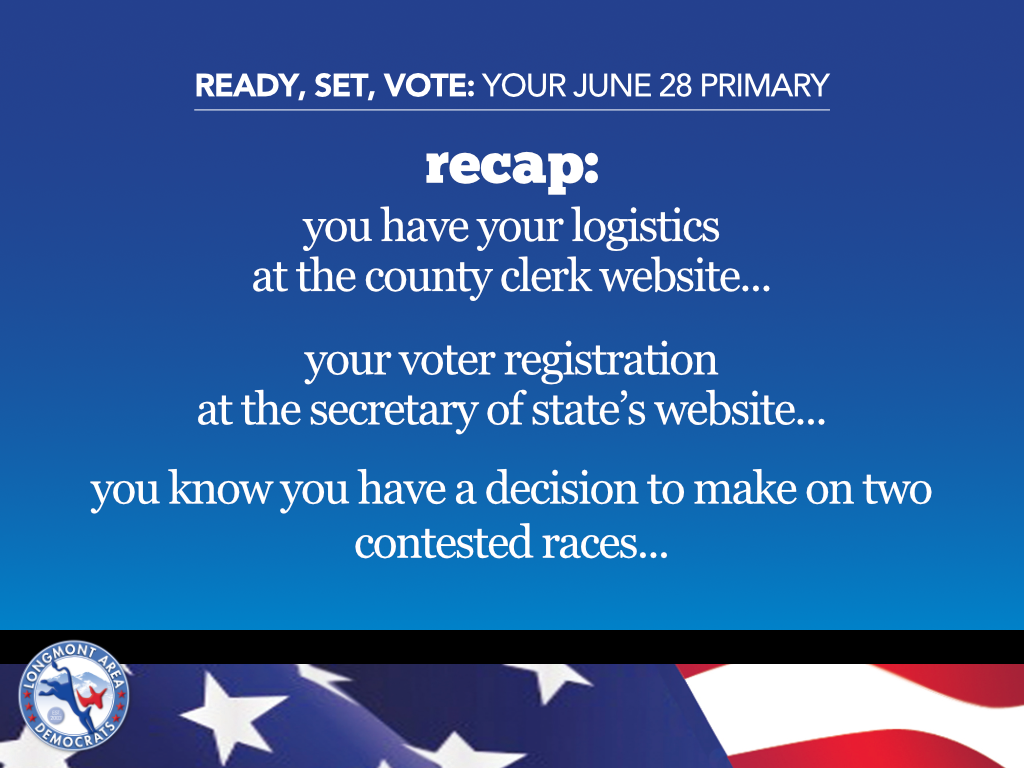 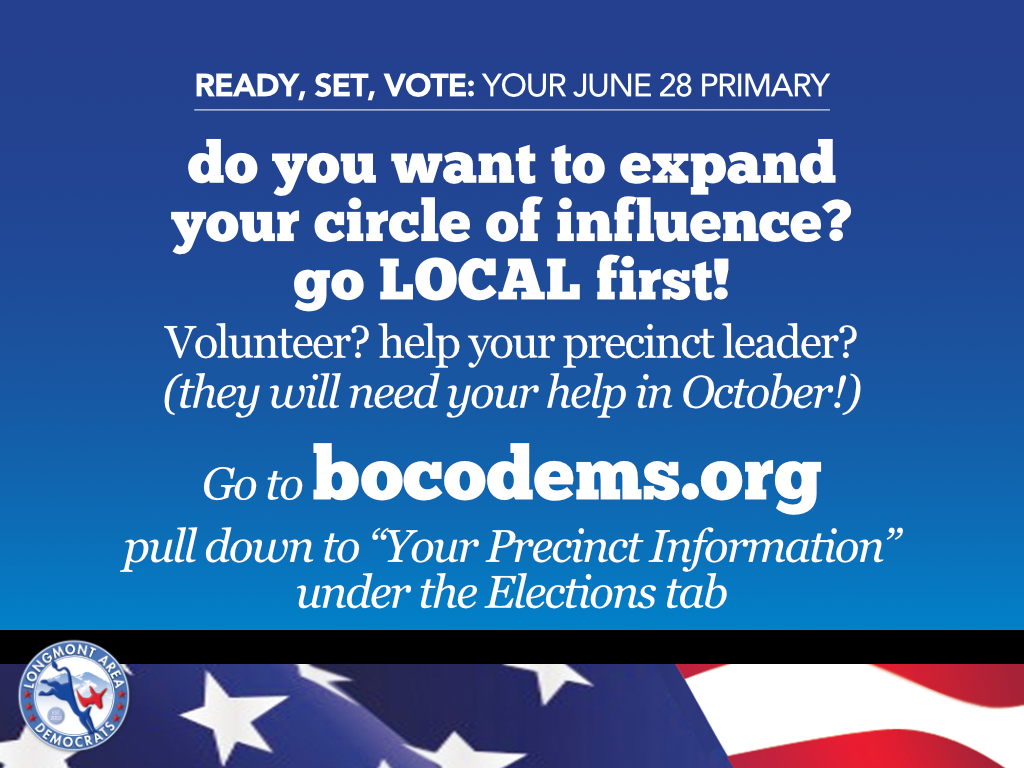 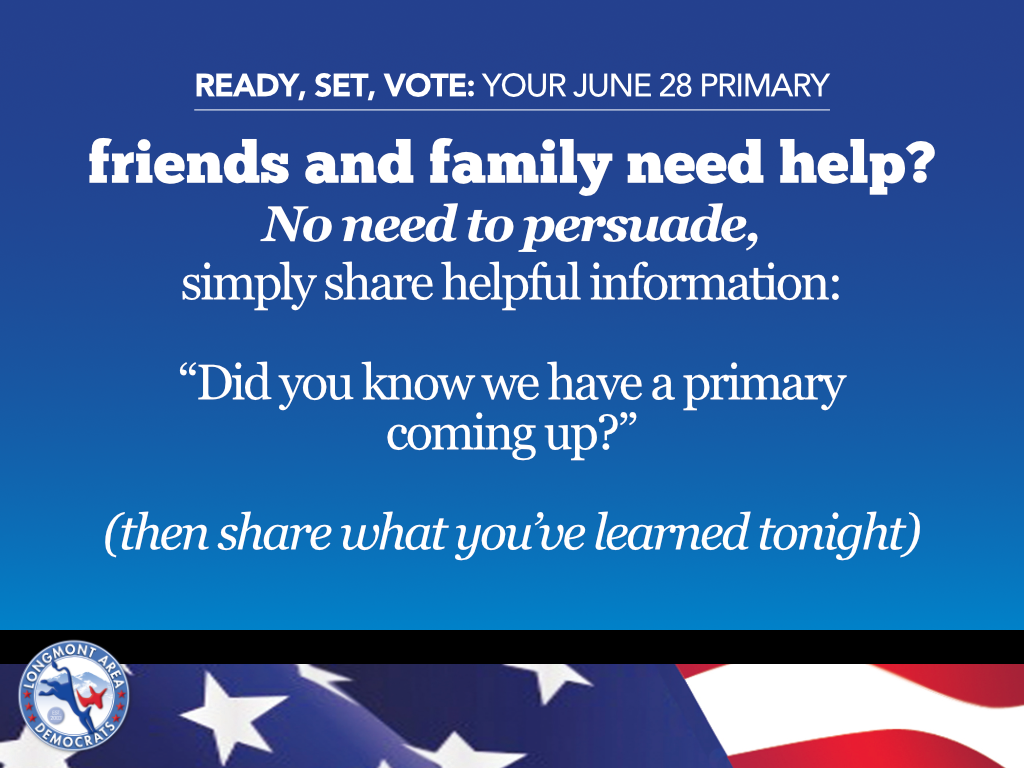 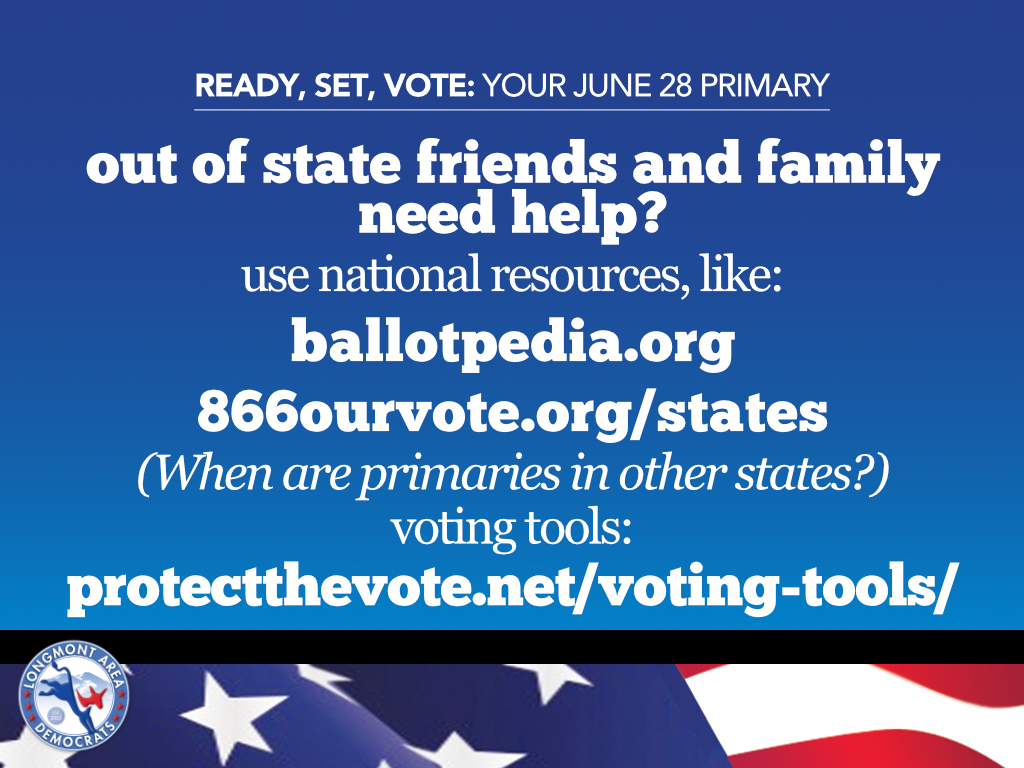 — MAY —
The Boulder County Democratic Party (BCDP) holds its annual fundraiser,
the Champions of Democracy Celebration on Sunday, May 15.
(Tickets for the online event — with keynote speaker Representative Katie Porter! — are still available, here.)
Please consider a donation, or even a recurring donation to the BCDP, the very best use of your grassroots dollars! Why? Because you know exactly where the money is going: supporting neighborhood volunteers, who have dropped the BCDP Voter Guide at doors, during every election, since 2008!
ALSO in MAY: Research Democratic candidates in contested races:
attend Meet & Greets & Town Halls, ask questions about the issues YOU care about!
Decide who you will vote for in the upcoming primary on June 28.

Caucus is where your Precinct Leader is elected, or re-elected.(Precinct Leaders are neighborhood volunteers who help get out the vote, post primary, once Democratic nominees are on the ballot.

Please consider volunteering to help your Precinct Leader drop BCDP Voter Guides!
(perhaps THE MOST rewarding thing you can do! Plus, it’s responsible for RECORD TURNOUT for Democrats in Boulder County, which helps to determine STATEWIDE RACES!)

At Caucus, folks stepped up to be Delegates for County Assembly, where those delegates will cast votes for candidates running for districts within Boulder County to be on the Primary Ballot.

— SEPTEMBER —
*In September, usually by the time of the Executive Committee meeting (second Wednesday of the month), the Boulder County Democratic Party (BCDP) will vote on ballot recommendations (“Support”, “Oppose”, or “Take No Position” — whatever position is announced, has to garner 2/3rds majority of the voting Executive Committee members). A committee is formed prior to the September meeting to thoroughly research the ballot issues, so that arguments for and arguments against can be presented at the EC meeting. After the vote, those recommendations are announced on the BCDP website at bocodems.org and are included in the BCDP Voter Guide (printed, and online at bocovoter.org)

YOU’LL RECEIVE YOUR BALLOT MID-OCTOBER!  But also during October, it is your precinct leaders primary job to drop voter guides at doors, beginning the same week that ballots arrive in mailboxes, then dropping “vote notes” — reminders to drop off ballots in the days before the election on Tuesday, November 8.
Contact your precinct leader, and ask if they need help, here.
TWO HOURS ON A WEEKEND CAN MAKE A DIFFERENCE!

Come back to this widget for updated information about the road to your ballot: 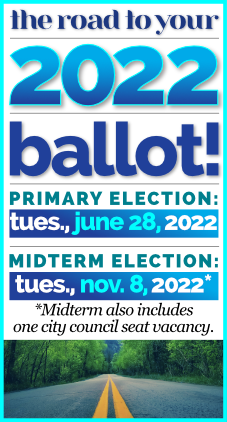 Redistricting happened last year, and maps for both the congressional districts and state legislative districts were finalized by the Colorado Supreme Court in December. (CDs 1—8 representing Colorado in Washington, and 35 state senate and 65 state house districts totaling 100 representatives in our state legislature’s General Assembly). The Boulder County Clerk just finished “reprecincting”,meaning, reconciling the new district lines with how they might modify precincts. Precincts are neighborhood districts, essentially. And county parties elect precinct leaders for each precinct at the caucus process in March. The primary task of the Boulder County Democratic Party Precinct Leaders is to elect the Democratic nominees on every part of the ballot (Democratic nominees are candidates that have won the primary in June).  ALSO: The 2022 Colorado Legislative Session started on January 12.We now have Democratic majorities in the state house and state senate chambers, but the lead is only 3 votes in the state senate, and we could lose that! Republicans in state legislative majorities all over this country have proven that when in power, they will pass legislation to attack voting rights. They’ll do it here in Colorado, too.

RIGHT NOW, LOOK UP YOUR DISTRICTS: Go to govotecolorado.com, which will take you to the Secretary of State’s website.(UPDATE: The new district info has been flowed into the voter database on the Secretary of State’s website.) Click “Find my registration”, then fill out your name, zip and birthdate. (if you aren’t registered, please do so now, and if your address has changed, please update your record). Once your voter registration record appears, click the “County and District Information” tab, where you’ll see your long precinct number up top. The last 3 digits are your “unique precinct identifier”. The rest of the numbers are your district numbers, as explained in the “what does this number mean” link (the “o7” is the number for Boulder County). Make note, or take a screenshot of them. You’ll find that some of your districts have changed. And even though your present representatives for the former district lines will still serve within those lines for the rest of the year, some of them will be running for office for the new lines. (Are you confused yet? You’re not alone, but we’re here to help! EMAIL US WITH QUESTIONS:longmontareadems@gmail.com)

WHY IS THIS IMPORTANT?: When you know your districts, you can find out who represents you or for that matter, who doesn’t. Candidates for your congressional district, one US Senator (Bennet), State of Colorado (that’s Governor, Secretary of State, Attorney General and State Treasurer), all the county offices (Sheriff, Commissioners, Clerk, Assessors, Treasurer, Surveyor) — and more, will ALL be on your Primary Ballot, June 28. And knowing this early will inform you about candidates and the rest of your ballot, and is likely to further engage you in the democratic process.

You can check out the new district lines for the Longmont area by clicking this widget. There are changes throughout the districts for Longmont, but the largest change is for Longmont’s congressional district (formerly CD4, now CD2):