The Board of Longmont Area Democrats is often faced with issues, events or decisions made by our elected officials, that we feel strongly enough about to make a public statement. The statement is reviewed and revised by the board and then posted publicly. We will store all statements on this page from oldest at the bottom to newest up top.

Longmont Area Democrats Board of Directors Defense of Democracy Statement, 1/18/22: 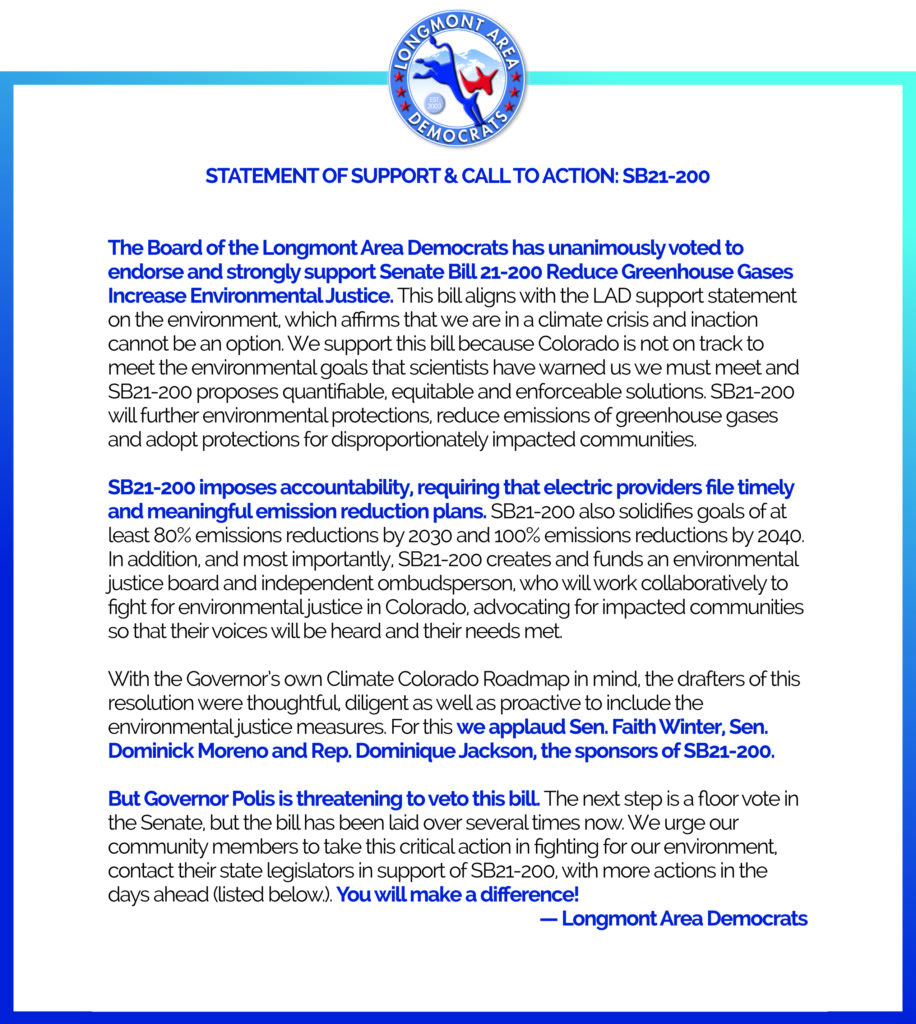 TAKE ACTION on SB21-200: Urge State Senate leadership to take the bill to a vote on the Senate Floor!
Senator Rhonda Fields: “Vote for SB200 for environmental justice”. By phone: 303-866-4879 (preferred). By email: rhonda.fields.senate@state.co.us

Senator Chris Kolker: “Vote for SB200 to create jobs in the clean energy industry and tourism”. By phone: 303-866-4883 (preferred). By email: chris.kolker.senate@state.co.us

Senator Robert Rodriguez: “Vote for SB200 to create jobs in the clean energy and tourism industry”. Need to hear from non-environm ental voices in the community. By phone: 303-866-4852 (preferred). By email: robert.rodriguez.senate@state.co.us

Senate Majority Leader Steve Fenberg: “Thank you for being a climate champion and leader, please use your influence to secure passage of SB200 in the Senate”. Need to hear from everybody in Boulder. By phone: 303-866-4872 (preferred). By email: stephen.fenberg.senate@state.co.us

DAILY: Call the Governor’s Office Call 303-866-2471 during business hours and ask the Governor to support SB-200 and sign it into law. 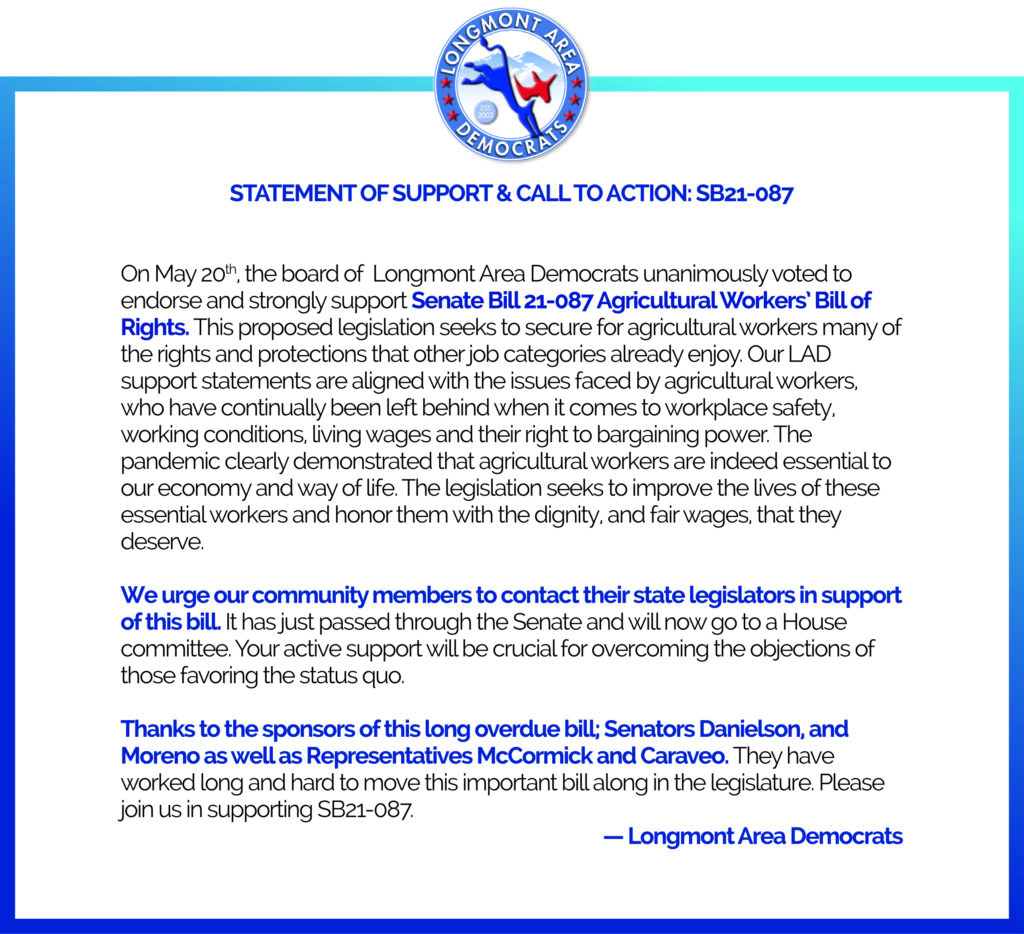 KEEP CHECKING on the status of SB21-087, here. The bill has made its way through the Senate, and is now assigned to the House State, Civic, Military, & Veterans Affairs committee, but it has not been scheduled. Once scheduled, please contact those committee members and urge them to vote yes on SB21-087. House & Senate floor & committee updates, here.

CONTACT State Representative Karen McCormick, HD11 (Longmont) and thank her for her sponsorship of the bill: 303-866-2780. Email: karen.mccormick.house@state.co.us

ABOUT the bill, here.

Longmont Area Democrats
Letter to Senator Hickenlooper
(in response to his yes vote on an anti immigrant amendment
to the American Rescue Plan Bill)
February 10, 2021

Your words matter. Your votes matter.

A mere month after being sworn in as our US Senator, having been duly elected by Coloradans — those that voted for you in our primary, and perhaps more importantly those that did not — you voted in favor of an anti-immigrant amendment.

This stings at the soul of what we know are Colorado values. The voters that sent you to Washington are common sense, fair-minded, and deeply skeptical of political opportunism and pandering. We hold the residents of our great state, regardless of their background or their status, in profoundly humane and equitable esteem. Not only is the United States a nation of immigrants, Colorado is a state of immigrants, documented and undocumented. They are our neighbors, our community, our essential workers, and are parents of children who were born here. Regardless of the dishonest and racist GOP narrative, undocumented folks pay taxes, are law abiding, and live peacefully amongst us.

Denying relief during a pandemic to anyone sends a ripple of dangerous repercussions. And it is especially dangerous to those who have already suffered so demonstrably because of a broken, heartless immigration system and a racist former president. A system you promised with “political will”, to reform when elected.

Further, your vote has devastating impact on an even deeper level: this pandemic has so disproportionately impacted communities of color in both rates of infection and inadequate resources for relief, that it is clear that underrepresented communities would feel left out, yet again, with your vote.

Your vote does not matter less now that the amendment has been overturned by Vice President Harris. Indeed, your vote is on record. We will not forget, nor should we abide that you could so easily pander to republicans in support of something so inhumane and egregious.

But make no mistake. Your vote is not just a matter of access to Covid-19 relief and resources, it is a matter of trust in your representation of our BIPOC communities (Black, Indigenous, People Of Color). Ask yourself, after promises you’ve made directly to our communities of color, how was a vote like this fortifying their faith in you?

Coloradans expect you to be brave and moral as you represent ALL of us. During this time of great urgency, we expect you to immediately commit to supporting impacted communities and take every opportunity to deliver necessary aid and protection to all Coloradans. We need you to keep your promises of rebuilding our economy, and fixing for the long-term, our broken immigration system.

We understand that “difficult” votes and amendments will come your way as our Senator, but the intent of every one of your votes must be clear and transparent. If you claim Washington is “dysfunctional”, Coloradans expect you to be part of the solution, not the problem.

As we commence upon a historic week of holding the former president accountable, there will be no less accountability for your votes as our newly elected Senator.

We will fully support any efforts on your part, to protect and be more inclusive of all those who call Colorado home, thus empowering the United States of America as a whole. 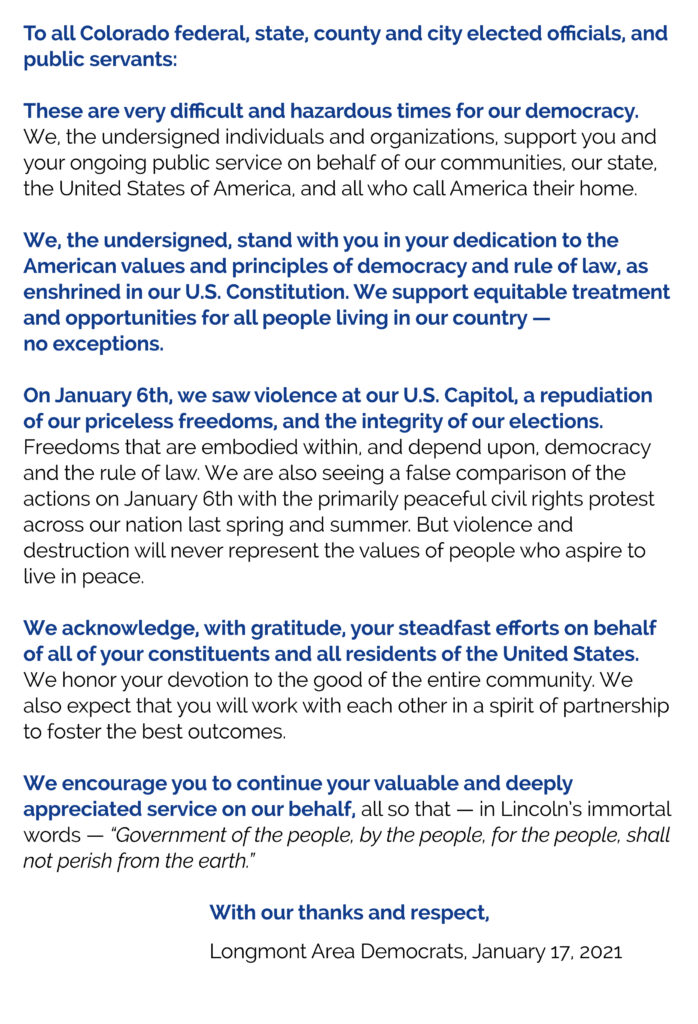 If you’d like to sign-on in support, please go here.

UPDATES: The LAD Support of Democracy Statement was read at the Longmont City Council Public Forum meeting on January 19, 2021.

The following organizations have signed on in support:
Longmont Leads with Love

For months now in Colorado, eight Democratic Senate candidates have been working hard to communicate with Colorado voters their positions and how they can help improve life for everyone in our state. They stepped up early on, and saw the primary contest as a chance to continue to move Colorado forward.

Now that conversation has been interrupted by a new candidate, who has been “anointed” by the DSCC as their candidate of choice. With all due respect to our national democratic leadership, the best Democratic nominee to beat Cory Gardner should be decided by Colorado voters. They have a history in this fight.

After all, that’s why we have a caucus and assembly system, and a primary. In the fall of 2018, Colorado had the second highest turnout in the nation. Colorado is no longer purple but trending blue and progressive. Decisions like this from the DSCC are insulting to Colorado Democrats, who’ve worked hard building this vital momentum. We believe the DSCC’s premature endorsement was made without understanding the wants, needs and ideas of the Colorado electorate. This is at best, short-sighted and at worst, dramatically undermines our true democratic process.

Colorado State Democratic Party Chair, Morgan Carroll said it clearly: “The Colorado Democratic Party has a strict policy of neutrality in primaries and we will not change that policy. There is a lot of grassroots energy to defeat Cory Gardner which is why so many excellent candidates have stepped up to run. At the end of the day the people of Colorado will be the ones to decide who will run against the most vulnerable Republican senator in the country and it will be the people of Colorado who lead us to another blue wave.”

We stand with the Chair in her assessment and strenuously object to the DSCC’s decision. Let this Colorado primary play out in the fair manner that our democracy intended.

— The Board of Longmont Area Democrats, September 4, 2019