2 YEARS AGO, COLORADO LEGISLATORS passed HB19-1261, legislation that established statewide greenhouse gas reduction goals. Although considered a landmark bill, unfortunately we aren’t on track to meet the goals that scientists have warned us we must meet. So this year, legislators drafted SB21-200, which not only ensures electric providers file timely and meaningful emission reduction plans, SB21-200 also solidifies goals of at least 80% emissions reductions by 2030 and 100% emissions reductions by 2040. In addition, and most importantly, SB21-200 creates and funds an environmental justice board and independent ombudsperson, who will work collaboratively to fight for environmental justice in Colorado, advocating for impacted communities so that their voices will be heard and their needs will be met.

SB21-200 has passed out of the Senate, and next is to be assigned to a House committee. With the Governor’s own Climate Colorado Roadmap in mind, the drafters of this resolution were thoughtful, diligent as well as proactive to include the environmental justice measures. But Governor Polis is threatening to veto this bill. To that we can only say, “if not now, when?” The ash has barely settled from the devastating fires last fall here in Colorado, as only one, devastating example — so the time to act is now.

“Our communities, Black, Indigenous, and other communities of color are on the frontlines of climate change. There is no climate justice without environmental justice, and there is no environmental justice without quickly reducing pollution and meeting the science based targets. Our communities cannot wait any longer for restorative justice that addresses the generations of hurt caused by being flushed out and choked out of our homelands with no legal and moral protections. We need genuine leadership and actions to change the system, to undo the years of extraction from our communities for profit and put the survival of disproportionately impacted people first.”

— Renee M. Chacon, Cultural Educator for Spirit of the Sun

“Our climate goals are only as strong as our plans to execute them. This bill translates Governor Polis’ ambitious climate goals into quantifiable, equitable, enforceable rules for the industries that are responsible for our state’s pollution. Only with this kind of specificity and accountability can we tackle the climate crisis and achieve environmental justice.”

Joe Salazar’s Opinion: “Through his veto threat, Polis is failing to deliver on campaign promises on renewables and climate change”, Colorado Sun, May 4, 2021, here.

READ ALSO about HB21-1266, Environmental Justice Disproportionate Impacted Community — farther along in the legislative process — which creates the environmental justice action task force, the goal of which is to propose recommendations to the general assembly regarding practical means of addressing environmental justice inequities. The task force will hold meetings, solicit public comment concerning the development of a state agency-wide environmental justice strategy and a plan to implement that strategy, including ways to address data gaps and data sharing between state agencies and the engagement of disproportionately impacted communities. It will also evaluate and propose recommended revisions to the definition of “disproportionately impacted community” and file a final report, regarding its recommendations. 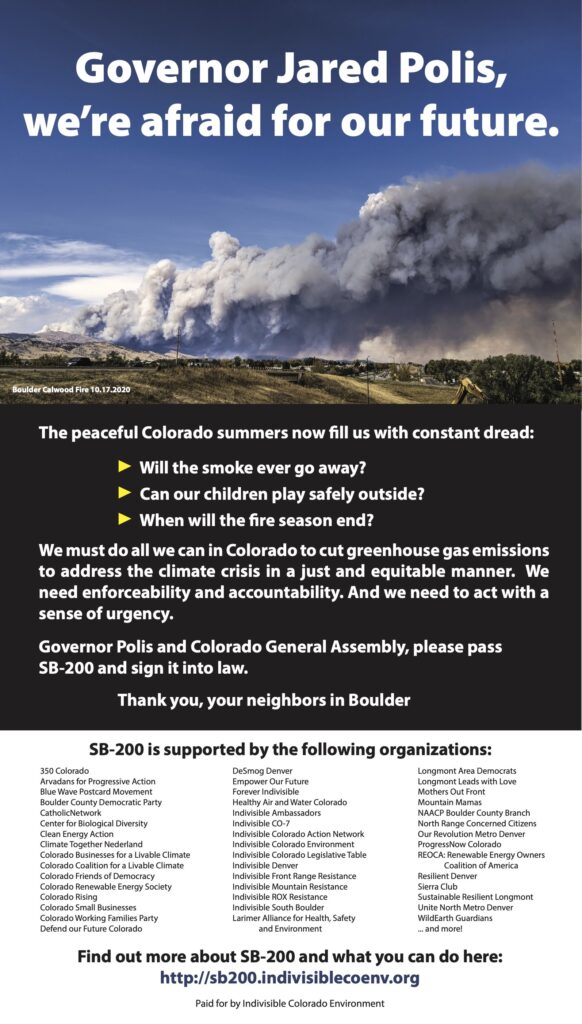 On Wednesday, May 12, 2021, the Executive Committee of the Boulder County Democratic Party voted in support of SB21-200, via the following resolution:

In 2019, the Colorado Legislature enacted HB 19-1261, CONCERNING THE REDUCTION OF GREENHOUSE GAS POLLUTION, AND, IN CONNECTION THEREWITH, ESTABLISHING STATEWIDE GREENHOUSE GAS POLLUTION REDUCTION GOALS AND MAKING AN APPROPRIATION. In order to foster the health, welfare, convenience, and comfort of the inhabitants of the state of Colorado and to facilitate the enjoyment and use of the scenic and natural Capital letters or bold & italic numbers indicate new material added to existing law; dashes through words or numbers indicate deletions from existing law and such material is not part of the act. resources of the state, the legislature directed state government to require the use of all available practical methods which are technologically feasible and economically reasonable so as to reduce, prevent, and control air pollution throughout the state of Colorado; to require the development of an air quality control program in which the benefits of the air pollution control measures utilized bear a reasonable relationship to the economic, environmental, and energy impacts and other costs of such measures; and to maintain a cooperative program between the state and local units of government.

In an effort to enable and describe the implementation of the goals of this bill, Sens. Winter and Moreno and Rep D. Jackson introduced SB21-200, Reduce Greenhouse Gases Increase Environmental Justice Concerning Measures to Further Environmental Protections, and, in connection therewith, Adopting Measures to Reduce Emissions of Greenhouse Gases and Adopting Protections for Disproportionately Impacted Communities.

Whereas the climate crisis at hand leaves no time for equivocation, and;

Whereas the TIMEFRAME COMMITTED TO BY MANY OF THE SAME DEMOCRATS WHOM NOW CONSIDER THIS BILL, by passing and signing HB 19-1261, will not be met without the further measures required here, and;

Whereas Social Justice is a critical pillar of progress and is the heart and soul of good Democratic policy, and;

Whereas, the creation of an Environmental Justice Ombudsperson is critical for the protection of frontline communities disproportionately impacted by the Climate Crisis, and;

Whereas appointed commissions are an accepted means by which regulation is promulgated and enforced in the State of Colorado, and;

Whereas, it benefits the reputation of the State of Colorado to continue to lead in the area of Greenhouse Gas Reduction, encouraging companies to locate in an environmentally-conscious atmosphere and;

Whereas, the majority of people living in the State of Colorado strongly support measures to combat the climate catastrophe and want leadership that reflects their goals, and;

Whereas averting a climate catastrophe is in the best interests of the people of the State of Colorado, and;

Whereas the people of Colorado have the right to expect Democrats who run as climate advocates to deliver when the opportunity presents, and;

Whereas we cannot be guaranteed the ability to do so in the future, and;

Whereas even if we did, it will be too late to avoid the worst impacts of climate change upon the people and the ecosystems in which they live and which support us all.

So therefore be it resolved, The Boulder County Democratic Party emphatically supports these goals and strenuously encourages the passage of SB 21-200 with the strongest voice possible.

Be it further resolved, that the Boulder County Democratic Party be approved and authorized to disseminate this to other outlets as deemed necessary by the chair and vice chairs of the party.

Comments Off on If not now…when? Support SB200!