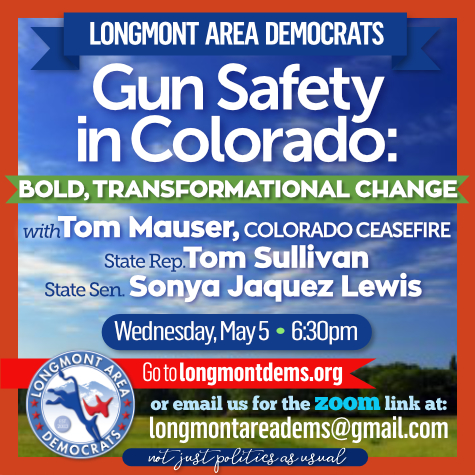 THIS WEDNESDAY, May 5, 6:30pm via ZOOM — We’ll send the link Wednesday morning!

Democratic House Speaker Alec Garnett said in a press conference last Thursday, “We are standing before you, working on issues that the vast majority of Coloradans want.”

In addition to the measures SB21-078 Lost Or Stolen Firearms and HB21-1106 Safe Storage Of Firearms — both of which have already been signed into law this session — our legislators also introduced 3 new bold gun safety measures, including the Office Of Gun Violence Prevention. State Rep. Tom Sullivan said this: “Don’t let anyone tell you what we’re doing today isn’t bold and transformational change.”

At our next meeting, Tom Mauser, whose son Daniel was killed at Columbine, and who has been a fierce and tireless gun safety advocate ever since, will tell us about his work via Colorado Ceasefire, an organization instrumental in passing historic gun safety legislation that has saved lives, including ERPO (Colorado’s Red Flag Law). Download or view “Responding to the Arguments of Gun Rights Activists”, handout, here.

Also on hand will be State Rep. Tom Sullivan who, after his son Alex was tragically killed at the Aurora Theater, advocated for gun safety even before he became a lawmaker. Longmont’s State Senator Sonya Jaquez Lewis will also join us to talk about this critical legislation and other bills she is working on.

We’ll allow plenty of time for questions, and as always, we’ll provide updates and action items!