Instead of throwing a shoe at the TV, set the cynicism aside — for just a minute — and remember why we vote: There are serious issues at stake. And seriously good candidates who need your support.

Mark and Vic will be at Longmont’s Coordinated Campaign office TOMORROW, Monday, October 20th, at 5pm (700 Ken Pratt Blvd, Ste 122a. Enter from Pratt Pkwy, then a quick left, north of Big Lots).

This isn’t sound bytes, this is honest conversation with Senator Udall, an elected public servant who cares about Colorado and our nation with a proven history of fighting for the right things — and with first time congressional candidate, Vic Meyers, who’s not afraid to scrap with Ken Buck over the issues he believes are important to the folks of the 4th CD.

Senator Udall and Vic Meyers will also be at the CC Longmont office on November 1st at 11:30am…we’ll keep you posted on updates…

Join us and please…bring a friend! AND THANKS FOR ALL THAT YOU DO!

(Meanwhile, take a look at KUSA’s Kyle Clark asking Cory YET AGAIN how the Federal Life At Conception Act, which he still sponsors, isn’t a Personhood measure…share widely!) 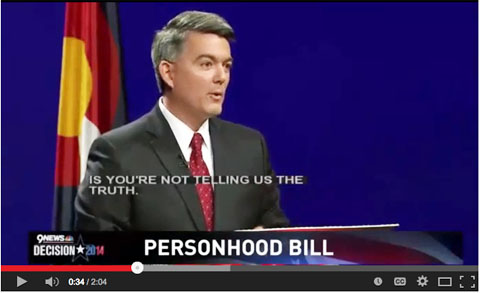 Comments Off on Come see the real deal…