Your ballot will also include Judge retention votes. We suggest going to Judgepedia for help on that.

Ballotpedia is another source for all ballot items.

These are only recommendations, our primary goal is to make the navigation through your ballot as smooth as possible, voting with as much information as we can give you to make up your own mind. If you have any questions, please leave them in the comments below. I’ve listed the recommendations from the BCDP Voter Guide and these recommendations were as a result of votes cast by the BCDP Executive Committee. (Issue 2a has “No Position” because majority was not achieved according to BCDP rules.)

Also, as with every election, new information comes in, context is drawn, and there can be additional considerations to be made.

Speaking of that, Amendment S: Here is a link presenting who provided funding for Yes on S

I also have information from True Blue Boulder discussing both sides.

YOU CAN EARLY VOTE UNTIL NOV. 2 at the Boulder County Clerk at 529 Coffman Street, M-F, from 8am-6pm, Sat, from 9am-3pm. VOTE YOUR WHOLE BALLOT. OR drop off your mail in ballot if you’ve already received it (a county clerk office person will stamp your ballot received and you can drop it in the locked ballot box yourself). Please bring ID…And HERE’S A TIP: the sooner you vote, the sooner your name is taken off the lists to receive calls or knocks… 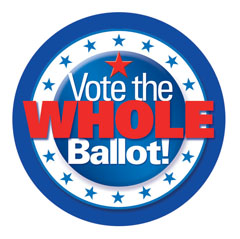