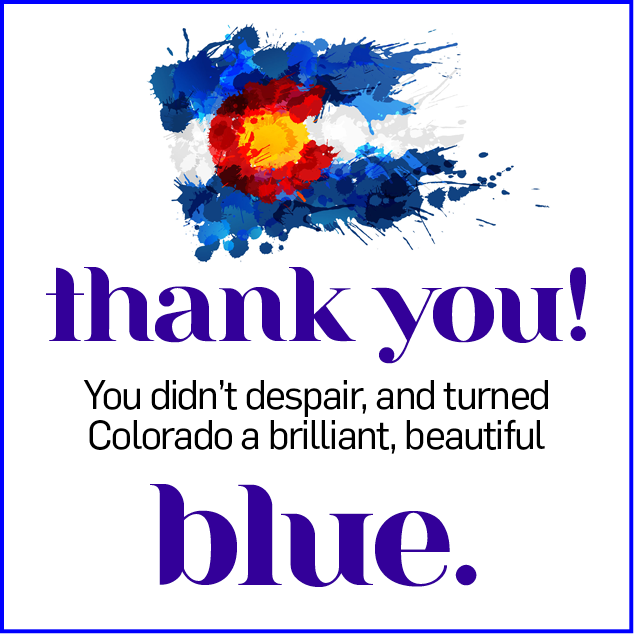 That means we SIGNIFICANTLY affected the outcome of statewide races:

JARED POLIS is Colorado’s first openly gay governor-elect (given that Colorado was formerly dubbed the “hate state” and Masterpiece cake sales aside, Jared’s orientation was not an issue or the subject of attack ads.)

PHIL WEISER is our Attorney General-elect.

JENA GRISWOLD is our Secretary of State-elect. She is also the first woman ever and the first Democrat elected to the seat since Eisenhower was President.

DAVE YOUNG is our State Treasurer-elect…

We now have a FULL BLUE MAJORITY in our State Legislature (the Colorado General Assembly), with 41 Democrats in the State House — the largest number since 1959. State Representative KC BECKER (HD13) will be our Speaker of the House and State Senator STEVE FENBERG (SD18) will be our Senate Majority Leader. Our legislature now proudly has its first transgender member, BRIANNA TITONE (HD27) and its first openly gay Latina ROCHELLE GALINDO (HD50)

KAREN MCCORMICK (Congress – 4th) and TIM KRUG (State Board of Education, CD4) gave VALIANT and PRINCIPLED FIGHTS. We CONGRATULATE them both for working so hard to connect to voters all over the 4th Congressional District. That knowledge is invaluable.

LESLEY SMITH is CU Regent At Large — the only Regent with faculty experience!

Boulder County continues to boast an impressive roster of Democratic public servants. We are grateful.:

BUT, A DEMOCRATIC MAJORITY in Colorado’s General Assembly might address what these measures were trying to.

THANKFUL that Amendment 74 did not pass! If it had, Oil and Gas would have been able to do whatever it wanted in Colorado. Also thankful 109 didn’t pass — a bad transportation bill, with no way to fund it.

ALSO THANKFUL we finally rid our Constitution of slavery (Amendment A), we passed redistricting reform (Amendments Y & Z), we designated Industrial hemp as statutory (Amendment X), and we put a cap on payday loan costs (Proposition 111).

Comments Off on thank you!